History of the City of Bijeljina

Archaeological and other explorations so far show an image of continuously inhabited Semberija since prehistoric time, or the Later Stone Age, around 5,000 B.C.. Despite numerous migrations, wars, changes of various state and administrative systems in later periods (since the time of the Roman Empire to modern times), this area was almost never uninhabited.
PREHISTORY AND ANTIQUITY
The oldest confirmed traces of people living in the territory of today's City of Bijeljina originate from the Later Stone Age -  the Neolithic (5,000 – 3,000 B.C.), and remains from the Bronze and Iron Age have been found. Most of the remains from these periods were discovered in the agricultural districts of the villages Ostojićevo, Batković, Glavičice, Dvorovi, Kojčinovac, Patkovača and Triješnica. The characteristics of pottery, tools and weapons unequivocally confirm the cultural ties of prehistoric inhabitants of Semberija with the Neolithic Vinča culture, or with the cultures of the Bronze Age - Vučedol, Kostolac and Baden.
Echinoid fossil from the genus Clypeaster, site in the village Modran, on the former shores of the Pannonian Sea, and stone axes from Neolithic (exhibits of the Museum of Semberija)
Archaeological discoveries from the Iron Age are related to the arrival of Celtic tribes, on the eve of the Roman conquests (VIII – I century B.C.).
During the Antiquity (I – V century A.D.), Semberija, as well as the whole of Posavina, was a part of the Roman province of Pannonia. The most significant archaeological discoveries from the Roman period have been discovered at the sites of Prekaje in Brodac (a Roman villa), Kojčinovac (a tombstone), Velika Obarska (lead plaque for cult purposes with icon of the so called Danube horsemen), Amajlije (bronze figurine 13 cm high), Modran (a hoard of Roman money), Dijelovi (two stone lion sculptures), and there are some sites discovered in Janja, Dvorovi, Batković, Patkovača. Somewhere in the area of Donje Podrinje (one of the banks of Drina) there was a Roman settlement Ad Drinum (on Drina), but its exact location is not yet known.
Roman statues with depictions of a dolphin and a lion, site in the village Dijelovi (exhibits of the Museum of Semberija) 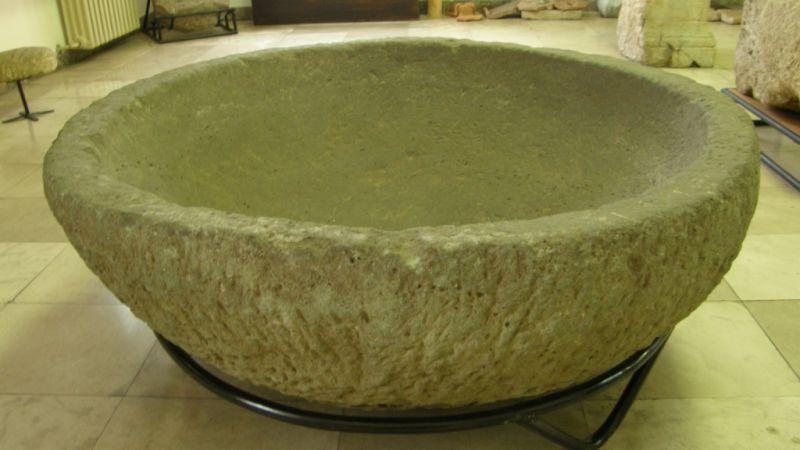 Roman stone mortar, over one metre in diameter (exhibit of the Museum of Semberija)
EARLY SLAVS
The oldest Early Slavs site in Semberija is located on both sides of Bistrik, between Batković and Ostojićevo, and it contains four smaller sites ranging from the seventh to twelfth century. At the sites of Jazbine and Oraščić remains of a settlement from 7-9th, and 10-12th century have been discovered. There were half-buried dugouts with wattle and daub walls and compacted earth, and the most significant discovery was a complex of metallurgical workshops at the site of Čelopek. They were used to melt iron and to manufacture iron tools in the eighth century, which was confirmed by a discovery of cast iron-graphite pot which is kept at the Museum of Semberija. At that time, the settlement on Bistrik, probably called Bistrica, was, without a doubt, a centre of the district which included the whole valley, before Bijeljina was founded. 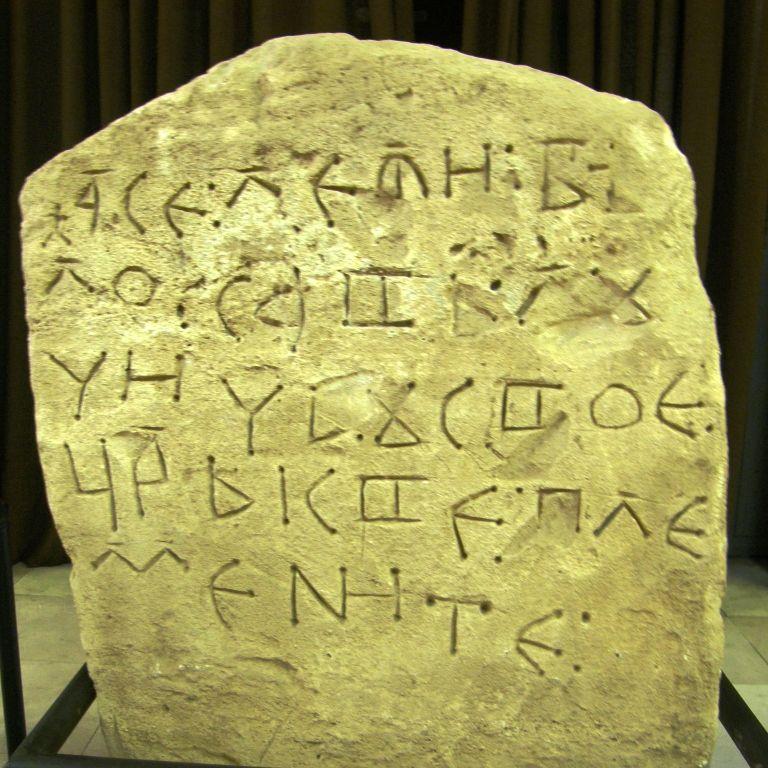 Tombstone with Cyrillic inscription, pre-Turkish period; found during works on rebuilding the Atik Mosque in the centre of Bijeljina
Inscription: AND HERE LIES BELOSAV LUČIĆ IN HIS NOBLE CHURCH
THE STONE WAS PUT BY HIS SONS
MIDDLE AGES
The first mention of the name Bijeljina is lost in distant past. A victory of Bela-Pavlimir, prince of Zahumlje, against the Hungarians in the ‘plain of Belina’ is mentioned in the 'Annals by priest Dukljanin'. However, due to extreme unreliability of this document and a number of proven inaccuracies, it is considered today that the first certain mention of Bijeljina is the one from 3 March 1446, when a merchant from Dubrovnik was robbed here by people working for the Ban of Ilok. The document describing this event in the Latin language is kept in Dubrovnik National Archive, in the Lamenta de foris collection, and is translated as follows:
“On 3 March 1446,
Bogiša Bogmilović, before Mr Alojz, the Prince of Dubrovnik, submits a claim against Vučić Pribišević and Vučić Ugrinović and Radić Gučić, and other people working for Osvart, the Ban of Ilok, stating that they robbed him in Bielina, and took: goods, ducats, silver and cloth – 435 ducats and two horses with weapons and his clothes and one silver tray“.

Facsimile of the document containing the first mention of Bijeljina (Dubrovnik National Archive)
In addition, the discovery of medieval tombstones with old Cyrillic inscriptions during the rebuilding of Atik Mosque in the centre of Bijeljina shed a new light on the history of this area in pre-Turkish period. Altough none of the tombstones has a certain date, the paleographic analysis shows that the inscriptions originate from a long time span from the second half of 14th to mid 15th century, meaning that some of them were there even before the text related to the origin of the name of Bijeljina, which is kept at Dubrovnik National Archive. This confirmed one more time that Bijeljina was a separate district in pre-Turkish period, and that its centre was at the place where a church existed. There was a road going through the district, from Podrinje through Srebrenica, Kušlat, Zvornik, Teočak and Bijeljina to Mitrovica and Ilok. That main road was connected to the road coming from the river Bosna, or Dobojgrad, through the valley of Spreča, and then through Srebrenik and Soli.
Middle Ages in Semberija were marked by constant fighting for supremacy in this area between the rulers of Serbia, Bosnia, and Hungary, as well as lower feudal lords. The oldest religious building – Tavna Monastery originates from the Middle Ages. It is believed to be an endowment of King Dragutin’s sons, and that it originates from the beginning of 14th century.

A sword from 15th century, site in the village Dvorovi (exhibit of the Museum of Semberija)
Weakened by feudal disputes and inter-Christian struggles, these countries did not manage to resist the attacks of the Turks, so Semberija, as well as the most surrounding countries, fell under the Turkish rule in 16th century. The final occupation most likely happened around 1530. After that, in the first census of Zvornik Sanjak (district) in 1533 only four villages were mentioned in relation to the territory of Bijeljina: Četvrtkovište, Mirkovci (Dašnica), Grm (Galac), and Čukojevići (Modran) with 55 houses in total. The census of 1548 showed an increase to 17 villages with 772 houses, of which 554 were Christian (Orthodox) and 218 were Muslim. By the 1580 decree by Turkish sultan, Četvrtkovište (centre of today's Bijeljina) was assigned the status of kasaba (small town), was appointed the seat of kadiluk for three nahias or districts (Bijeljina, Koraj, Teočak) and market day and annual fair were established. About a half century later, according to the so called 1634 Sidjil of Tuzla and some other sources, the headquarters of kadiluk was once again called by its name from the middle ages – Bilina. 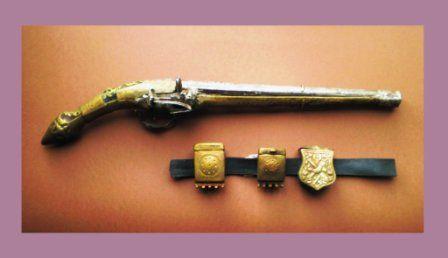